Ifeanyi Oganwu: How an architect discovered the space between the precious and the industrial in jewellery design

“Working with bronze offers a chance to engage with a time-honoured material that stretches across millennia, cultures and disciplines,” says architect-turn-jeweller Ifeanyi Oganwu. Sitting down with writer Mazzi Odu, Ifeanyi traces the foundations that lay beneath his work to reveal a design language informed by a deep respect for material history and urban environments.

‘A lot of work carried out in the studio focuses on the human scale with furniture and spatial installations, jewellery offered a way to extend that way of working,’ says Ifeanyi Oganwu with characteristic understatement about the scope of his ambitions and its knack for exceeding objectives. Oganwu’s studio, Expand Design, certainly lives up to its name. An architect by training, Oganwu is equally known in design and art circles for his furniture with the Crater Side Table shown at London’s 1:54 Art Fair, the Splice Chair Shown at the Vitra Design Museum in Germany and an installation shown at TEFAF, Maastricht in partnership with Tafeta Gallery. His first foray into jewellery design is his Cityscapes Collection that was shown at the Elisabetta Cipriani Gallery to critical acclaim, a collaboration which he modestly describes as a case of “the right project coming along where I felt I could make a worthwhile contribution or at least give a different and meaningful perspective”.

Oganwu was born in Nigeria, but his jewellery design practice is not a visual paean to his cultural roots, “I’m not really driven by narrative and try as much as possible to offer a viewpoint which is driven by technical parameters,” he says of his practice, although he notes that having an architect father meant, “I was lucky to have a foundation before my formal education in architecture kicked off in the late 1990s.” Oganwu has embraced the benefits of cross-cultural fertilisation without allowing it to govern his interests adding: “My past experience made for a strong connection with the continent and the Diaspora, while my practice also intersects with multiple lines of thought.” In many ways his method is contrary to the contemporary trend to place lived experiences as the best fount from which good design and art can flow from. 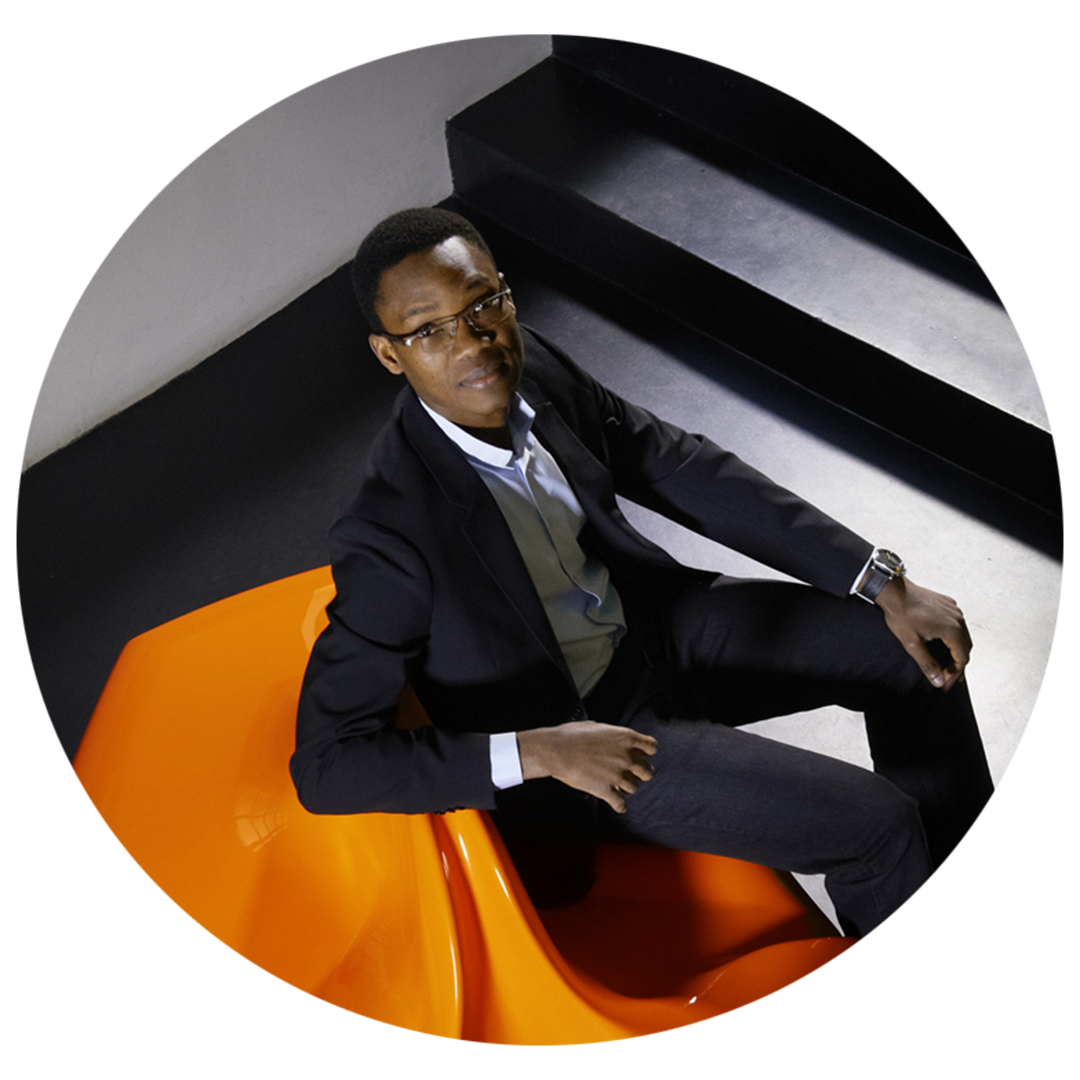 Ifeanyi trained as an architect before turning to design. He studied architecture in Chicago, London and New York before collaborating with the design studio of designer Hussein Chalayan, the architectural firms of John Ronan and Zaha Hadid as well as the structural engineering firm AKT II. He has since founded the design studio Expand Design. 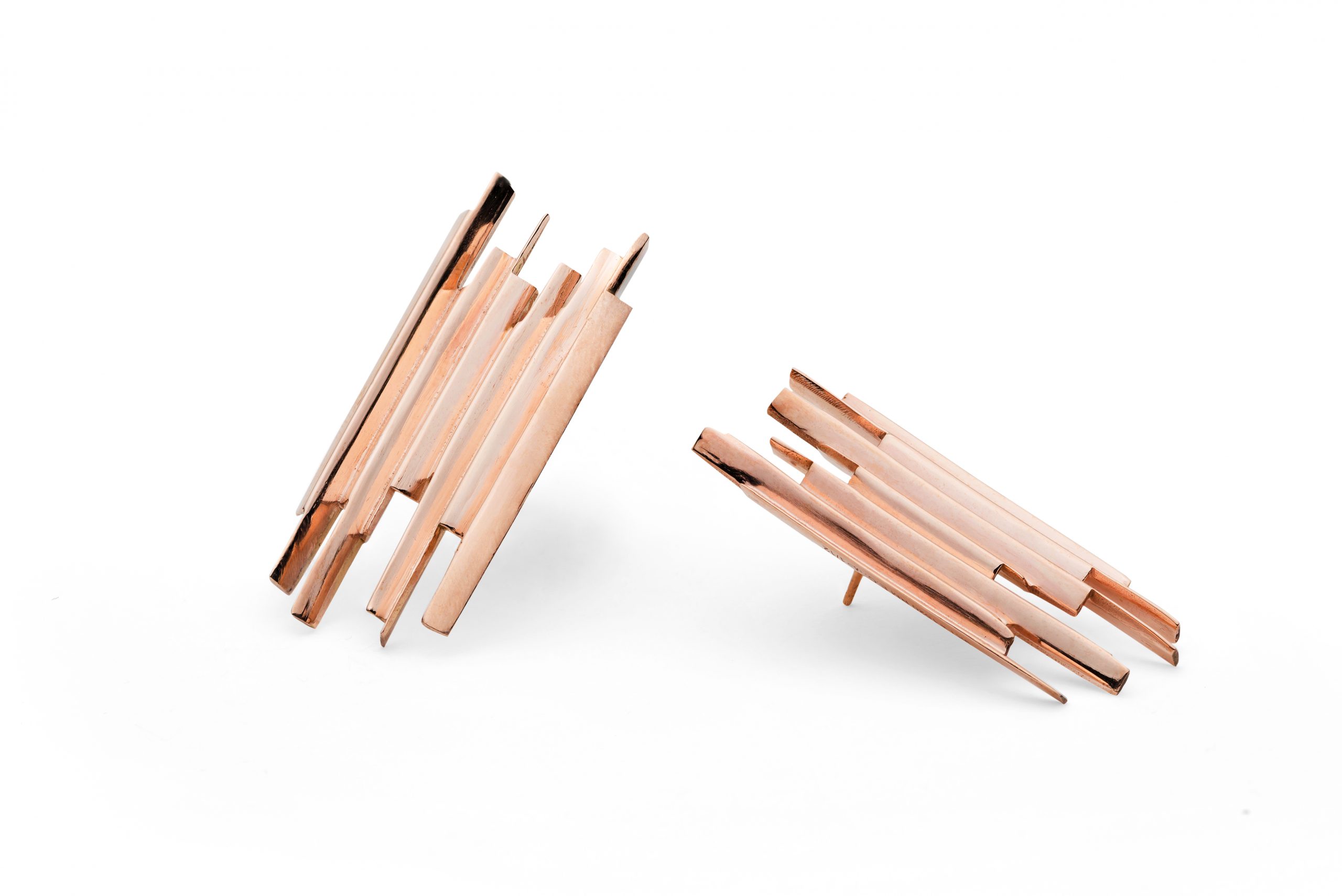 Instead, Oganwu takes his cue for explorations from the built environment. “The Cityscapes are inspired by the metropolitan skylines which are reflected on bodies of water. This is a feature shared by many of my favourite cities – Lagos, Chicago, New York and London. The collection seeks to unify this interface between nature and the man-made.”  With Cityscapes, Oganwu has created a love-letter to the urban skyline but challenged himself with positing it on the body “thinking of the shards as structures for the body was key.”

Like many interdisciplinary practitioners, his pieces are not purely conceived from an adornment perspective. Oganwu elaborates: “What I ended up creating was a system that I can adapt to different parts of the body as well as to different types of wearable forms…it really helps that they are conceived as wearable structures. The idea of systems then come into play as they are deployed across sites on the body.” Many jewellery artists have similar motifs in their design language, but Oganwu adds an analytical rigour to his proceedings: “A lot of my work is generative in design process, mostly through digital means. In every case there is a reduction of materials to adequate presentations of the typology in question”. Creating processes is intrinsically linked to the art which in turn is conscious of and kinder to the environment.

Materiality is a subject that Oganwu returns to frequently in his work. With Cityscapes he chose to create the collection in rose gold in part because “it has the appearance of industrial metal to me [and] some have mistaken the collection as works in copper. Working with 9kt rose gold lends that ambiguity between the precious and the industrial”. It is a theme one sees in other architects turned jewellery designers, most notably in Frank Gehry’s collections for Tiffany and the late Zaha Hadid’s collections for Georg Jensen that were either inspired by buildings of their own design or took aesthetic cues from the built environment. Oganwu has since expanded upon these theses using other metals: “I am learning about bronze and keeping an experimental perspective on titanium. Titanium reminds me of concrete as well as graphite it has a very tactile presence that is similar to holding a piece of the city in your hands.” However, this is not without challenges as he adds, “it’s a very slow process at times. The opposite of rapid prototyping, some call it slow prototyping”.

“I went into designing jewellery without a specialist knowledge of the field” notes Oganwu but he has allowed his autodidact status to give him a free reign in terms of locus of interests and execution. In some ways there are similarities in his methodology with the ethos behind the Fluxus art movement of the 1960s (international, collaborative and inter-disciplinary), and Oganwu agrees to an extent adding “I suppose it has parallels with the Fluxus notion of collaboration and bringing an external viewpoint to cross-disciplinary practice”.

When asked about the future of his jewellery practice, Oganwu states that “for the time being I’m focused on the Cityscapes and other works based on the same design principles.” But this does not mean that he is resting on his creative laurels, with projects including objects and sculptures in the pipeline. “Working with bronze offers a chance to engage with a time-honoured material that stretches across millennia, cultures and disciplines. I can hardly think of another material that is as synonymous with sculpture. For me it is an important conversation to have with the practice of sculpture. The connection with Benin works and many others that are at the back of my mind are a welcome bonus.”  For a creative who seemingly prides himself in a lack of sentimentality, the poignancy of being drawn to a metal with such strong links in the visual, cultural and historic landscape of western Africa is notable. 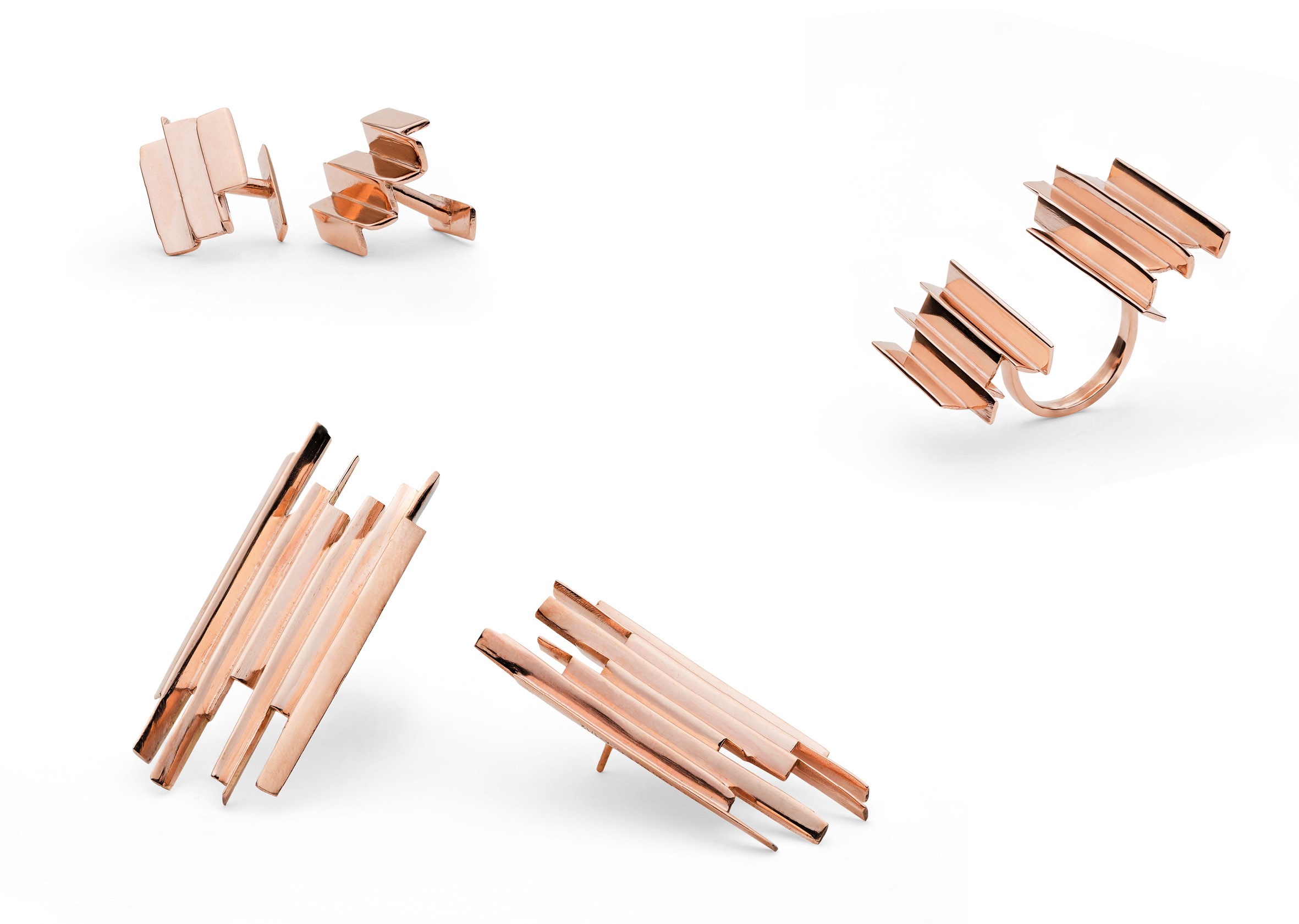 As our conversation draws to a close it is hard to not wonder what kind of legacy Oganwu has in mind given the breadth of his work. “I haven’t thought that far down the line, for now I am focused on learning about materials and our relationship to technology and how that impacts built forms and ideas.” Of jewellery specifically he notes: “Being an architect presents a challenge in that I tend to be detail focused and on that scale, jewellery can be daunting.” Yet it is this combination of concept and form, detail and the scope of possibility that a given metal affords, and his insatiable curiosity that has borne a practice which takes in so many manifestations of design, and makes Oganwu a compelling artist to admire, collect and wear.

Ifeanyi trained as an architect before turning to design. He studied architecture in Chicago, London and New York before collaborating with the design studio of designer Hussein Chalayan, the architectural firms of John Ronan and Zaha Hadid as well as the structural engineering firm AKT II. He has since founded the design studio Expand Design. 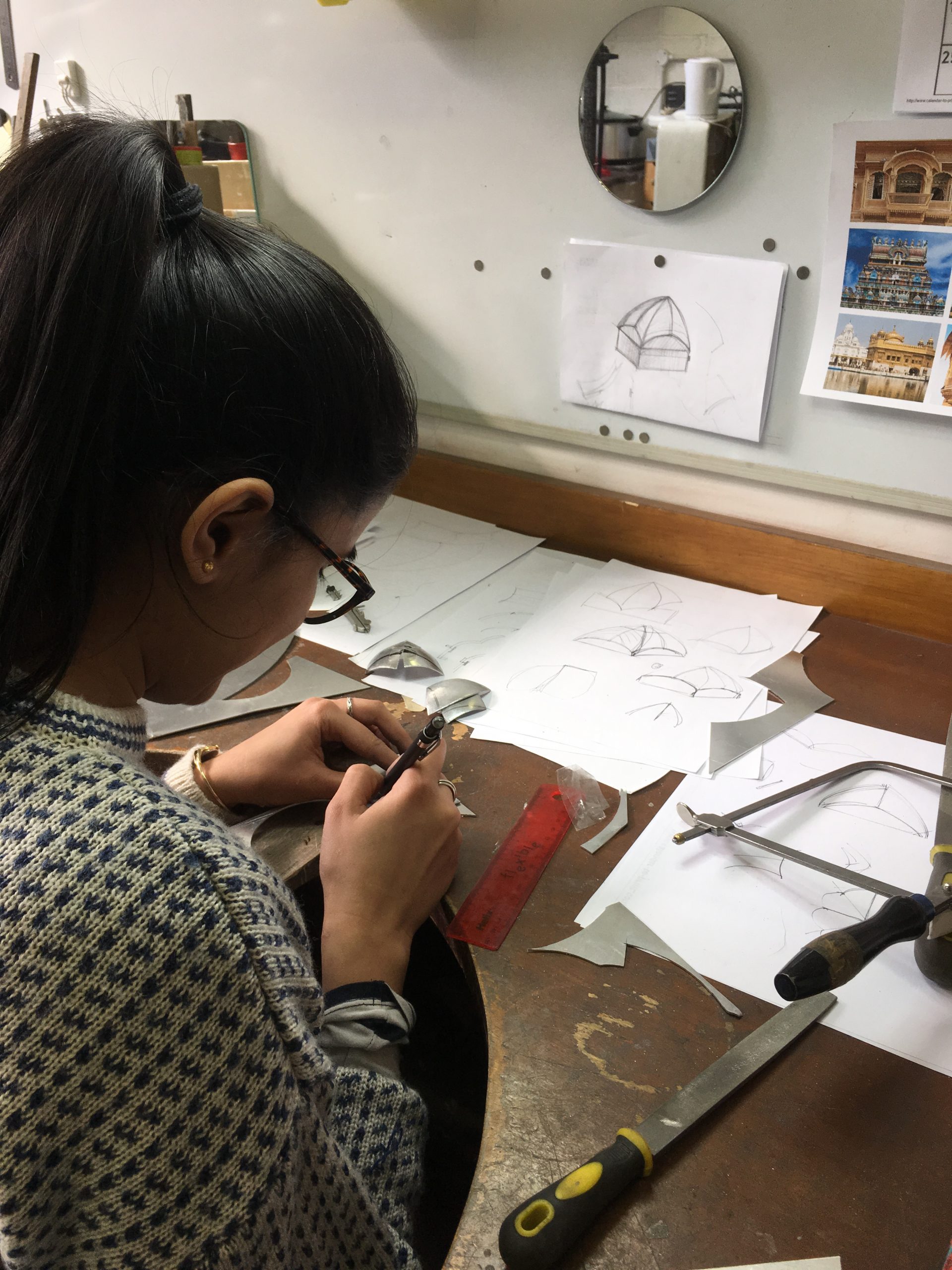 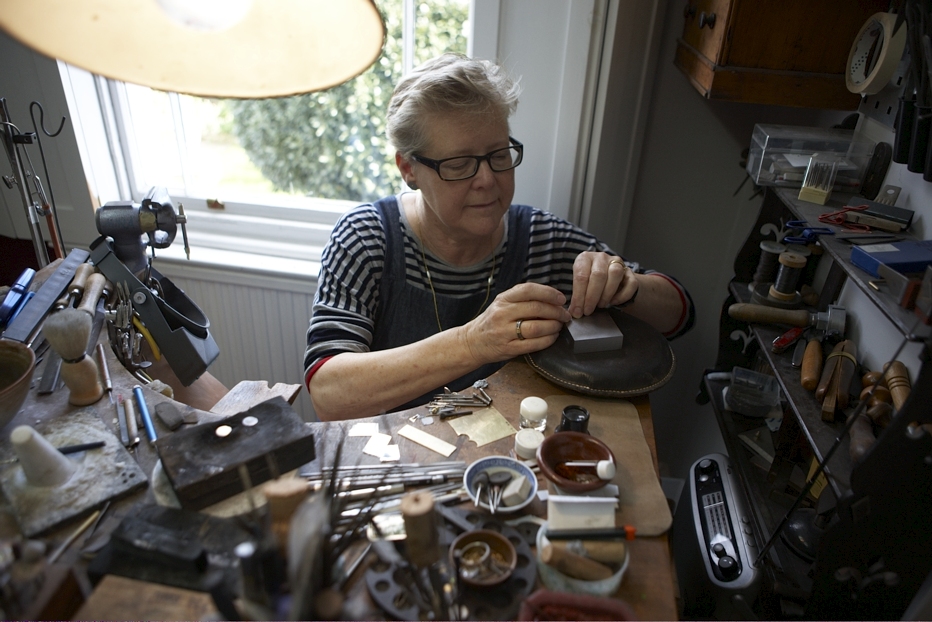 Jacqueline Mina: the jeweller-forensic who uncovered the secrets of Roman gold