This is not a wedding ring: style, symbolism and the single love story

Everyone knows what a wedding ring should look like, right? Maybe not. As Sophia Tobin shows, there is a continual evolution happening that runs parallel to our own changing definitions of how to memorialise commitment.

Hidden away in a wooden box, in a locked vault, is a small steel punch which played its part in hundreds of love stories. The end of the punch, barely visible to the naked eye, is a circle with a central section cut out. Most punches made by the London Assay Office are destroyed after use, so they can’t fall into the hands of forgers. But this one has been preserved. It is the wartime wedding ring punch.

During the Second World War the government had planned to stop the production of wedding rings in order to conserve gold. Rings could be provided, it was thought, by the second-hand market. But the sheer volume of couples rushing to marry made this impossible. So instead, the manufacture of wedding rings was restricted to 9 carat gold and a weight of less than 2 dwts (around 1.5 grams). To show that a wedding ring had been produced legally, it was stamped with the Utility mark punch. 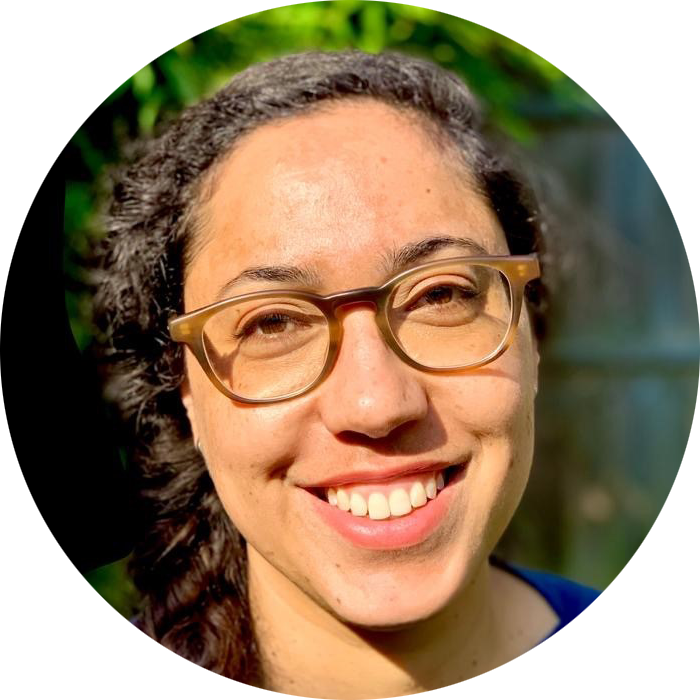 Melanie Eddy is a London-based designer-maker and academic who has trained in Bermuda, Canada, New York and London. She holds a MA in Jewellery Design from Central Saint Martins College of Art and Design and is director of The Association for Contemporary Jewellery.

Although the punch is a reminder of countless romances, the government’s decision was partly based on concerns about morality: the wedding ring was as an outward symbol of respectability. As Rachel Church, curator at the V&A and the author of Rings, says: “a wedding ring could be a plain gold band, perhaps engraved with a romantic motto; a glittering gem; a cheap and simple band or the creation of a top jewellery house; but all these rings were treasured by the women and men who wore them as a public sign of commitment.” A ring indicated a person’s married status to their community, as well as to their partner.

A wedding ring could be a plain gold band, perhaps engraved with a romantic motto; a glittering gem; a cheap and simple band or the creation of a top jewellery house.

Church describes rings as “perhaps the most widely worn and democratic of jewels,” and there is something special about the way in which they are constantly visible to the wearer, unlike other forms of jewellery. The custom of giving a ring on marriage is an ancient one, which seems to have originated with the Greeks and Romans. A vein from the third finger of the left hand was thought to flow straight to the heart, but there is evidence that various fingers were used as the ‘wedding ring finger’ through different eras and cultures.

Early rings could be inscribed with religious imagery, words or initials; and the form varied too: including the ‘fede’ (clasped hands); or the gimmel ring, made from interlocking hoops. Architectural Jewish wedding rings have been found from the medieval period onwards: often representing the temple and the home, they were used in the ceremony only. And from the 16th century, diamond-set wedding rings became fashionable for the wealthy. Church’s own favourite of the V&A’s rings was made in 1706, to commemorate the marriage of a couple named Katharine and Dudley, and depicts ‘two enamelled hands holding a crowned diamond heart – possibly symbolising the triumph of love’. But despite the rich variation in forms, the plain band was established early and endures in our collective consciousness.

Just like those wartime brides and grooms, many of us have recently discovered that a crisis focuses the mind on what matters to us: during lockdown, the Lebrusan Studio reported a 1,200% rise in the number of people searching for ‘commitment ring’ on their website. But the wedding (and commitment) rings bought today are not always the universally recognised bands worn by those wartime brides. They are often called upon to embody personal symbolism: in short, to provide a wearable reminder of a single love story.

Jeweller Castro Smith creates engraved rings of superb craftsmanship. At a recent Goldsmiths’ Fair event, Castro spoke of the ‘stories of love and loss’ they embody, which he draws out of his clients when they commission a ring. The rings he makes aren’t always wedding rings, but whether made to commemorate a marriage, a loss or a milestone in someone’s life, he sees them as ‘vessels for memories, containing hidden treasures’. Hidden, because they might contain motifs or stones in the inner shank, worn against the skin; or because symbols are carved in such tiny detail that perhaps only the wearer knows of them. One such ring was engraved with Lorde, a pet dog. Behind this minutely detailed engraving, barely the size of a fingernail, lay the story of a Gerard and Andres, who had taken on a rescue dog. Although adored by his new owners, Lorde had to be put down. Castro’s client Gerard proposed to Andres with the ring. It represents a single moment in the couple’s relationship, a symbol of faith and love.

The importance of style is also central to today’s discerning purchaser of jewellery. Jeweller Melanie Eddy has found that “people are becoming more and more interested in expressing individual taste and style in their wedding rings.” Couples often ask for rings which aren’t matching, but which share a stylistic relationship. “My signature faceted bands can be designed so rings share a template in the side profile; meaning that they might appear different in terms of the facet arrangement, metal choice or proportions, but the geometry starts from the same place with both rings.” The wedding ring set pictured was designed for a couple: sharing 18 carat gold and green tourmaline, they are still strikingly different. Nor is a band necessarily the go-to choice. “We are seeing women explore single stone larger rings as wedding rings now.  I’m seeing much more colour being incorporated in terms of the kinds of gemstones used – blues and greens and peaches and yellows.” And as for men, there is a similar sense of freedom in materials. “I have made wedding bands for men in rose gold, in palladium, in raw white gold, in silver.”

When departing from tradition, aesthetic choices are important. “People often want their wedding rings to fit into their lifestyles and to sit alongside and complement their taste for what they have in their homes and what they wear. They want the style and design to also be as meaningful to them as the significance and symbolism.” And does that suit the jeweller? ‘Everything is possible.’

Wedding rings don’t have to be commissioned from a jeweller in order to be unique. Dutch firm Insignety made a splash in 2018 by introducing personalisation consoles into high street jewellers: services included engraving the heartbeat pattern of a loved one on to a wedding ring. High street jewellers offer steel and titanium wedding bands as well as gold and platinum. And if you really want to get your hands dirty, many jewellers run workshops for couples who want to make their own wedding rings.

But for some, marriage is not on the agenda. The ONS’s most recent statistical bulletin on marriage revealed that since 1972, the number of opposite-sex marriages has declined by 45%. But jewellers have found ways to redeploy the power of the wedding ring’s place on the hand into something which symbolises a private, rather than public, commitment to oneself. De Beers launched its right-hand ring campaign in the early 2000s, encouraging women to buy rings for themselves rather than waiting for an engagement ring – and wear it on the third finger of the right hand. The trend has flourished. Like the recent reinvention of the signet ring, a revolution of a traditional form has taken power back from the giver to the wearer, from society’s norms to the internal world of the individual. One can choose, rather than being chosen.

The wartime wedding ring punch is a popular artefact. Visitors who are shown it often hold it with reverence, and peer at it as though it will reveal its history. Jewellery carries emotion, none more so than a wedding ring. Today’s wedding rings can embody secret messages, and symbolism known only the wearer and the giver. They can be the product of a careful design process, to ensure they suit the style of the commissioner. But the magic of wedding rings, whether plain or ornate, lies in their purpose. They take something intangible and embody it in metal, worn against the skin. In the play Hobson’s Choice by Harold Brighouse, the plain-speaking heroine is married with a brass curtain ring. This is not a wedding ring as we know it. It becomes one through the mutual agreement of two people to create a relationship as enduring as gold.

Melanie Eddy is a London-based designer-maker and academic who has trained in Bermuda, Canada, New York and London. She holds a MA in Jewellery Design from Central Saint Martins College of Art and Design and is director of The Association for Contemporary Jewellery. 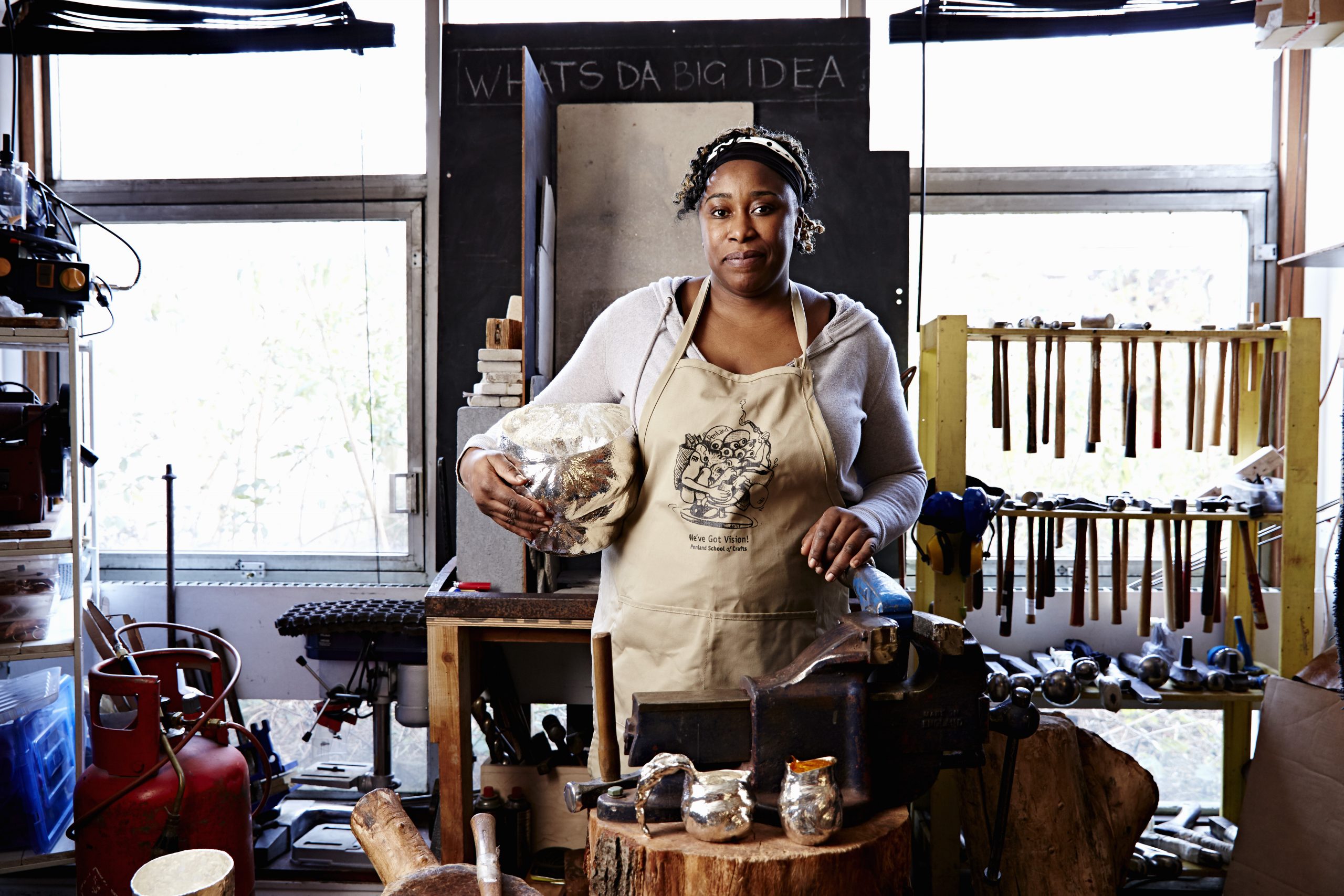 “Fire and water is all I need”: Tracing the elemental creativity of Ndidi Ekubia 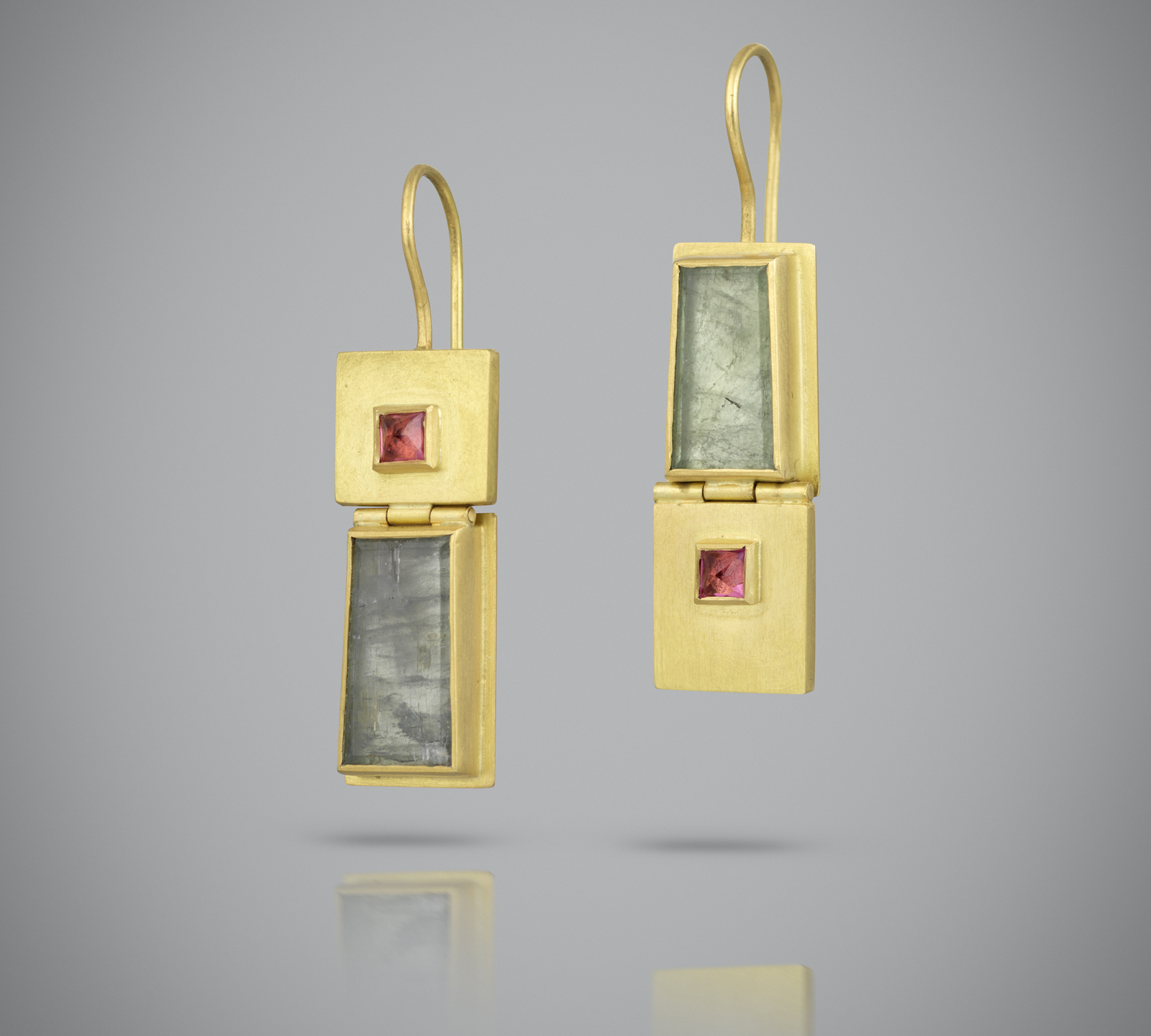 The Constants of Design: Catherine Mannheim and the quest for jewellery to be as individual as the maker